skip to main | skip to sidebar

Risso's Dolphins in Santa Barbara Channel
A pod of about 50 Risso's dolphins (Grampus griseus) were active in the Santa Barbara Channel yesterday. They seemed content to casually hang around our boat for a while and there was also a small group of Pacific white-sided dolphins (Lagenorhynchus obliquidens) traveling along with them. At first glance, one of the Risso's appeared to have a dolphin slipstreaming alongside her, but as it turns out, it was a Risso's calf that was probably close to being a newborn. Here are a few photos: 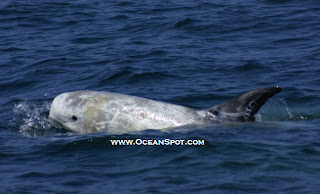 Mother and calf (calf is on left, very small): 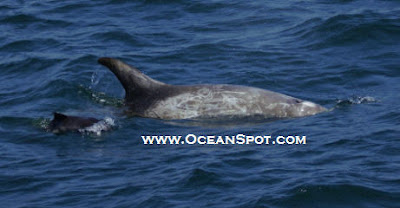 Dorsal fin of a Risso's dolphin (this scarring is the result of the teeth of other Risso's; all of the Risso's have this type of scarring): 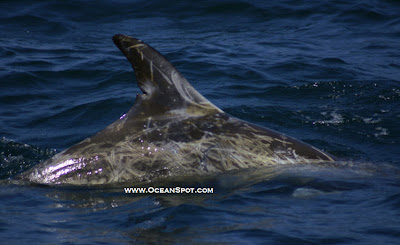 And some other marine mammals spotted along the way--a California sea lion who was bowriding right along with a large pod of common dolphins: 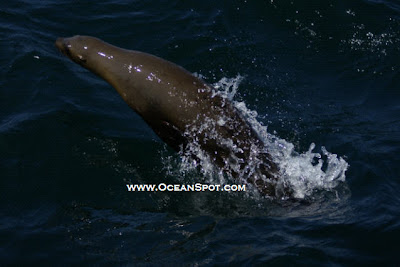 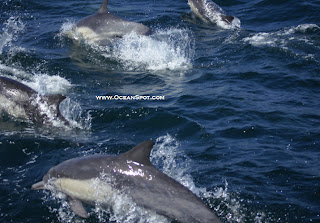 Sharks Truly Need Our Help
My friend Sean hosted a screening of the documentary film "Sharkwater" last night and I highly recommend this film to everyone. Humans are decimating the shark population in pursuit of fins to make shark-fin soup. This industry is quickly destroying the entire balance of the ecosystem across our world's oceans. Here's some data from both Sean & the movie:

- 90% of the world's shark population has been decimated over the past 50 or so years. Keep in mind that these animals have survived four major extinctions and they pre-date the dinosaurs.

- 100 million sharks are killed annually to meet the demand of the shark-finning industry.

- The majority of sharks are killed by a horrific practice called "shark finning" in which live sharks are pulled aboard a boat to have their fins cut off and then thrown back in the water to sink and die a very slow, painful death. Since there is not much room on boats, there is more space if they discard the body.

- Sharks are often caught by the "long-line" fishing practice, where fishing lines with thousands of hooks are dropped into the ocean, catching and killing countless other species such as sea turtles, sailfish, sea lions, and many other species of fish in the process. This by-catch is almost always discarded.

- Shark fins are primarily used as an ingredient in shark-fin soup, a traditional meal in Asia that was at one time available only to royalty and is often served at weddings or other special occasions. If you ever encounter shark-fin soup, please do not order it or eat it! Doing so will only further the demand for this industry. [My own recommendation is to boycott any restaurant that is serving it and to help educate the management about the troubles of this industry.]

- Sharks reproduce very slowly, some species only have two offspring every two years. Sharks cannot reproduce fast enough to keep up with the current rate of human consumption.

- 110 species of sharks are currently listed by the IUCN as a species under serious threat.

- At the rate humans are killing sharks, experts estimate that within 10 years, most species of sharks will be lost.

The "Sharkwater" documentary is available for purchase at Amazon or at www.sharkwater.com and can also be rented on Netflix. Also check out some of Sean's cool underwater pictures at flickr.

This is a Flickr badge showing public photos from oceanspot tagged with whale. Make your own badge here.